Whilst the books by inequality gurus Piketty and Atkinson are selling by the millions, less attention is paid to an arguably more important work on global inequality. Peruvian economist Hernando de Soto does something which most economists seem to dislike: he gets his hands dirty by actually visiting the countries that he studies.

Torturing
Instead of torturing the data on income or wealth until they finally admit to be unfair, De Soto simply travels to Egypt and ask the people themselves. Not a bad idea, because it becomes clear, pretty much immediately, that the data on capital that Piketty and Atkinson use are completely irrelevant for the developing world.

Developing countries
As an inhabitant of a (relative to Western countries) poor country himself, De Soto knows very well that official statistics on capital don’t sketch an honest picture. Extrapolating official or Western data is just meaningless. If you want to know what is going on in those countries you got to go there. And when you do, as De Soto did, you will find out that capital works fundamentally different in Egypt than in – say – France.

Poor or rich
De Soto finds that people in many developing countries are relatively capital rich (land, houses), but that their properties are ill-protected. The Arab spring is not only driven by religion or geopolitics, but equally so by people simply wanting to protect their property; not something you learn from reading books or studying official statistics.

Return on capital
This does not seem to be a feature that is in any way specific to Egypt. De Soto finds that the average Egyptian roughly earns as much with return on capital than with wages, something that is likely true in most countries where the informal economy dominates. 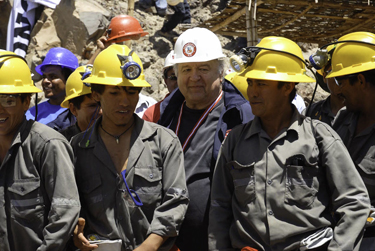 Roughly 90% of the world population lives in countries where capital is not appropriately reported in official statistics. The gurus ignore this but at the same time they propose far-reaching policies that will affect us all. They behave like economists that look for their lost wallet under the light. It is nice and bright out there, but the chance that you find it doesn’t increase.

Property rights
Instead of transposing Eurocentric data and policy solutions to countries where they have no relevance, De Soto comes up with an idea that will really help the people working and living in informal economies: registry and protection of property. Ironically this has been at the heart of Western welfare since the French revolution.

Global inequality
Global inequality does not stem from lack of access to capital at all, but from lack of protection and registration of property. This gives rise to poor incentives to invest, since the fruits of investments are confiscated by dictators or corrupt governments.

Spring or autumn
An Arab spring without registration and protection of property will lead to a depressing autumn.

This column appeared on 16-6-2015 in Het Financieele Dagblad (The Dutch version of FT), and was translated to English by Mr. Canoy.