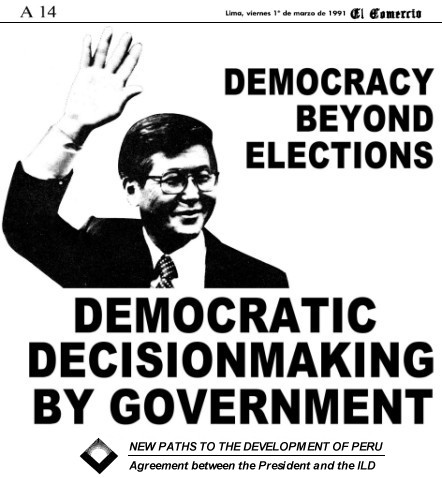 In April 1984, the ILD completed its first project, handing President Belaúnde a draft for legislation, the goal of which was to keep lawmakers informed about the public’s concerns and make them accountable by giving the people an opportunity to comment on the drafts of the laws as well as their effects. The President accepted the ILD draft and enacted Legislative Decree No. 283 and Supreme Decree No 071-84-PCM, stipulating that all laws and regulations issued by the executive branch —except those relating to public security and foreign affairs— must be published first in draft form for public scrutiny along with a statement of their objectives plus an estimate of the costs and benefits for Peruvian society. Citizens and the press would then be given one month to submit to the appropriate ministry or agency comments and suggestions about the draft. The government would also be required to provide adequate opportunities for people to discuss the new procedures in public.

Initially, Belaúnde’s ministers went along with new procedures, albeit grudgingly. But within a month they returned to their old ways, disregarding the law. The ILD and the great majority of media publicly pressured the President to demand that his ministers obey the law and return to publishing drafts of new regulations. The President, also under pressure from his own cabinet, demurred, and the ILD was forced to end its working relationship with Belaúnde. For the ILD, however, this was not an ending but a beginning because the genie was already out of the bottle: The ILD's message that government decision-making in Peru was fundamentally flawed and had to be reformed had received widespread support from the media and the public.

Over the next sixteen years and through two different administrations, the practice of publicizing drafts of laws gradually increased, though too often only when it benefited the government. Nevertheless, bringing the people’s voice into the law-making process had become an established political ideal in Peru. The ILD had thus established its presence in Peruvian life.