Picking up after Fujimori’s 1992 Coup 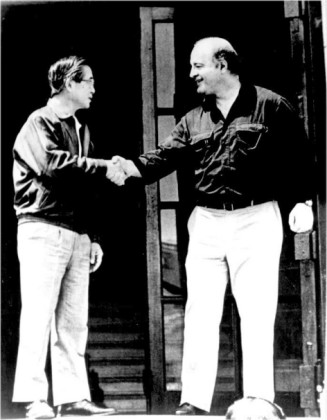 De Soto agreed, provided Fujimori accept two non-negotiable conditions: The return to electoral democracy, and the implementation of the ILD’s version of the democratic decision-making law, including the initiative for referendum and the independent ombudsman, that the President had approved a few months before until he bent to conservative pressure.

After four days of negotiations, Fujimori accepted. A new window to carry out fundamental democratic reforms in Peru had been opened.

The ILD then submitted a detailed proposal to reinstate democracy, calling for the election of a Constituent Assembly to draw up a new Constitution and act in addition as a law-making body that would oversee the Executive Branch. The new Constitution would have to be approved by referendum, and during the drafting period, citizens would be able to petition the Assembly with suggestions for constitutional provisions. Fujimori accepted the proposal.

The ILD then began exploring different venues for building international support for Fujimori’s commitment to create a better democracy. Additionally, it was trying to avoid international sanctions while the country was at war with the Shining Path terrorist movement and in the midst of a major economic crisis. As it happened, the Organization of American States (OAS) was scheduled to meet in the Bahamas on May 18th, only a month away. The ILD decided that the OAS meeting would be a good platform for Peru to make a public commitment to democracy and also avoid sanctions.

In a race against time, the ILD contacted the key foreign affairs ministers in the Western Hemisphere, trying to create a welcome atmosphere for the forthcoming Peruvian proposal to return to democracy. The ministers expressed their willingness to accommodate Fujimori at the OAS meeting, but impressed upon De Soto the importance of calling the new assembly a “congress” to underline the fact that Peru’s legislative branch was to be restored. The message was relayed to Fujimori who agreed to call the new Peruvian assembly the “Democratic Constituent Congress” (Congreso Constituyente Democrático - CCD).

With that settled, on May 15th, the ILD contacted the Uruguayan Minister of Foreign Affairs Héctor Gross Espiell, the OAS representative evaluating the Peruvian crisis, who was in Spain. That same day, the ILD made plane reservations and organized Gross Espiell’s trip from Madrid, via Paris, to Lima. On Saturday the 16th, the Uruguayan chancellor arrived in Lima, met with President Fujimori and then with the representatives of the opposition. Convinced of the viability of the Peruvian proposal, Gross Espiell traveled to the Bahamas on a Peruvian plane that same night for the 22nd General Assembly of OAS on Monday, May 18th.

That day, President Fujimori announced in front of the OAS a 5-month schedule to return Peru to democracy and to convene a Democratic Constituent Congress to draft a Constitution, just as the ILD had negotiated with the OAS ministers. He also stated that he would create a more open democracy by implementing various ILD proposals such as:

Establishing new regulations for the pre-publication of all laws, including statements of their objectives and benefits. Providing means for citizens to express their opinion on any law before it is enacted. Establishing the individual accountability of public officials and eliminating the anonymity of the administration vis-à-vis the citizens it serves. Providing for the right to binding and non-binding referenda held when enough people petition the Government to create or reject the law or confirm a policy.

Ensuring that citizens and the media have free access to information held by the Executive Branch —excepting that related to national security and foreign affairs. Creating an independent ombudsman.

Fujimori also committed to holding elections for Congress before the end of the year, and agreed to the implementation of multiple electoral districts (where each representative is from the same area as the people he represents); primary elections in political parties; and the acceptance of open candidate lists.

The OAS accepted the Peruvian proposal. Peru had thus sidestepped economic sanctions and international ostracism. The Democratic Constituent Congress was elected, met, drafted a new Constitution, incorporating the ILD proposals, and then passed the Constitution of 1993. However, it never enacted the legal and administrative mechanisms required to implement the new democratic reforms. Considering the President had broken his promise to the nation, the ILD went to the streets and in less than seven weeks collected more than 500,000 signatures (a mere 35,000 were required) demanding that Congress comply with the Constitution and calling for a nationwide referendum binding the President to implement the reforms. Instead of proceeding according to the Constitution, the Fujimori majority in Congress raised the ante of signatures required to initiate a referendum up to 1, 200,000. The Congress also countered the prospect of a new batch of signatures by voting itself the right to reject any popular initiative regardless of the public support it received.

The ILD complained about this perversion of democracy, but as the debate continued it was obvious that though the most people sympathized with ILD’s efforts, full democracy was not at that moment a priority. In the face of enormous progress in the war against the Shining Path terrorists and an upswing in the economy, the ILD could not mobilize enough support to get the issue of democracy back to the top of the national agenda. Also, the ILD’s request to the OAS for support monitoring Peru’s progress toward democracy went unanswered. The ILD assessed the situation and concluded that though it had failed to implement full democracy for Peru, most of its reforms were part of the Constitution and now comprised a fundamental part of the Peruvian social contract. No rational political group would dare to deny this. Surely, in the future a new window of opportunity would arise, and another group or the Government itself would see the light and allow democracy back to the top of the agenda.